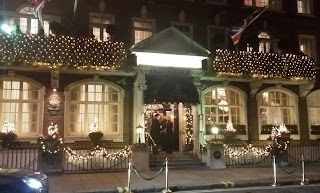 Making my way through customs in the UK, I had no idea how this trip was going to progress. Am I going into a “Taken” situation? Will this be fun? SO nervous to meet friends in international territory!! And Wow! London was so striking! The overwhelming amount of character from the people to the buildings was enough to make my head spin. I met up with Chris, who was always happy to see me, and we took a cutie diesel E class to our hotel…The Goring. WOAH! Class and sophistication don’t even begin to describe the vibe of this place, I see why the royal family and queen stay and do tea here. This bo-hunk-ass Ohio boy was sitting in the all wooden parlor enjoying tea and cocktails in no time! SO easy to Blend in…I thought…NOPE! At breakfast we were so uncouth having inside voice level conversations as the regulars nodded on with each other in silent agreement. SO American! And it only progressed from there….we escaped our posh residence to acclimate ourselves to the streets of London, dayam!!!!  There are tons of shops, pubs, and restaurants surrounded by beautiful structures.

Chris and I wondered around having proper fun out 1st night out! We ended up @ ZUMA, a very high end Japanese’s restutrant where I had the BEST Hendricks martini in my life (he muddles the olives into it, and stole my heart) & bar tender was sooooooo sexy….until he spoke -_-, what a homo. Those drinks….wow. and food did not disappoint! Only 2 hours to eat though!!! That night was awesome! Met some ladies from Russia and UK, cougar as fucked and wanted this D. I loved it J then we went out on the town to see the sights, it’s all so pretty @ night and the Burberry & Bugatti stores had me drooling! oye, vey! We came back to our hotel and enjoyed more drinks @ our 24/7 bar service J

I hardly slept that night, not from jet lag, but excitement! We were to meet up w/Brian, Jason, Bryan, and Chris’ nephew Ryan. Hubba friggin hubba, these brits killed me. Bryan, Jason, and Brian are from the US, but Ryan is a UK lad ;), oye. He brought his mate with him….Steve, whom all us gays assumed was Ryan’s partner….they’d be such a cute couple! Anygay, we all met @ the biggest train station I’ve ever seen! It was insanity! (Victoria Station). Another lad, Andrew, also joined us but was so-so, and I have no words for it. We all went on a huge pub crawl, so hella fun. I DRANK BEER AND LIKED IT!!!!!! Say what!!!!? Who am I? so good! A pint @ the pub w/ my lads J so fun! 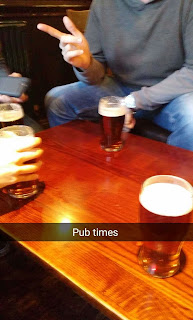 This carried on into the evening where we had more good drinks and dinner @ STK. STK is a very small steakhouse chain, stunning inside, and 800€ later, the most expensive meal I’ve had in a while – 1110$ USD! And it sucked -_- oh well. So none of us liked it….that’s okay, we carried on. Wanting to show the boys ZUMA we headed over, however, Ryan was wearing “trackies”, unacceptable attires for such a place. So we ended up stumbling over to our hotel for some drinks :O ahhhhh! The next day Chris and I got up to exercise and I ended up tossing cookies all over the elevator and hallway of London’s 8th nicest hotel -_-, go me! But who cares, today is NEW YEARS EVE! I was about to see the show of fireworks unlike any other! Yay! 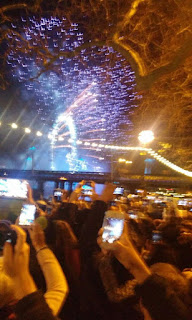 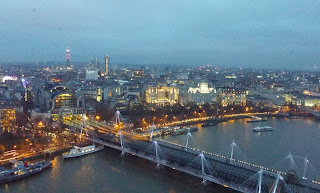 It went very well in the morning all the boys got together and palled around London until the evening. Unfortunately, Bryan got the wrong tickets for ½ the group, so they were in a different place than us, no bother! We had a blast and these fireworks were the bee’s knees. And we got shhhhwasted! And barged through the crowd of 500K + (!) holy shit! Such a crazy time. The next day was even crazier! After sampling another of London’s finest restaurants, taking a champagne tasting tour on The Eye, and seeing “the sights”, we ended up @ Winter fest! Well, well, well, I thought this was some ghetto little state fair until they had the most legit rides and drinks! I rode this big ass tower that drops you in free fall @ 0g’s, very cool, very not me ;) Wow, I didn’t know Steve could scream like that J                                           J J , such a puss. 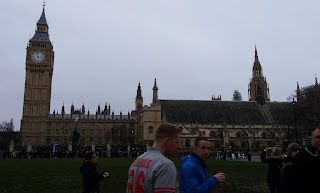 We walked home singing “dancing queen” (6 gays) (2 straight guys) and had more drinks @ our hotel. The next day was our last, we all met for breakfast and that was ok, turns out the UK has TERRIBLE food -_- except, bacon, of course. We left breakfast and headed to Heathrow airport towards Stockholm. 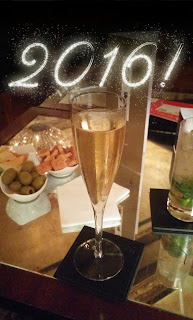 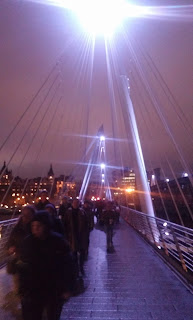