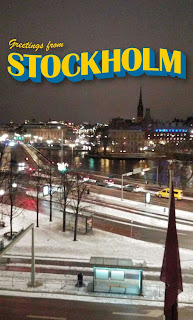 
If there is a place on this earth where actual perfection exists, it is in Stockholm. I have never seen a city so perfect in my life! No broken windows, cracks in buildings, no off colored paint, literally, everything was perfect. And while these SoCal boys did their best to not become ice cubes in their “warm” winter, we found a really good Italian restaurant called DaPeppe. The waitress here was hilarious and told us not to freeze our asses off when we got to the Ice Hotel, which was on the other side of Sweden in the Artic Circle…oye vey. After dinner we carried on back to the hotel, where all but Chris and I retired for the evening. In fact, we instead went to ….surprise!...the hotel bar, and learned from a lovely California Asian couple that we were just mere blocks from a legit ice bar! Curiosity piqued, we headed off into the night! I could have walked around Stockholm in that night for an eternity! The city had taken me, the company was perfect, and the bars we found were so unique (ice bar was too busy)  I hope I see places like this again! Great people, great bars, phenomenal city, and I will definitely be back for a Mid-Sommer party…more on that later. 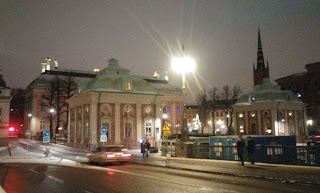 We really made the best of our one night in Stockholm before packing into our Volvo XC90 (the only way to get around Sweden is in a Volvo) and heading for the airport. Everyone noticed how crazy perfect this country was, even just driving around you didn’t see old cars, you didn’t seen broken anything, and the one homeless person we saw was on a queen mattress with a space heater and a full wardrobe (not joking) as though he was doing it by choice. A short 2 hour flight later and….
THE FRIGGIN ICE HOTEL!!!!!!!!!!!!!! 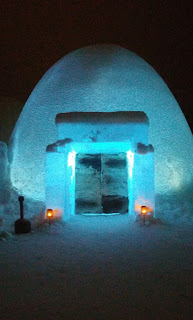 This place has been on my bucket list and in my dreams for over a decade. I am truly thankful for my friends and Chris for making this dream a reality. I felt like I had been transported to another world!! You get off the bus, the driver of which gave a really cool background story on the mining operations and space/medicine projects that go on up here….oddly knowledgeable actually. Anyways, another world. Literally. This big blue glowing wall of ice is the first thing your eye is drawn to. You just want to run towards it like a bug to a zapper. It was more perfection (you go Sweden *the Glenn coco of countries). We had to check in in the “warm” room, and they provided us with arctic gear! I was literally sweating the majority of the time!!! When we finished checking-in it was a dead sprint to the hotel, I couldn’t wait to lay eyes on the inside! Each year they have a different theme and artists sculpt special rooms and pieces throughout the hotel, they were all stunning. I have hundreds of pictures of the 60 or so rooms in this place, all of them completely unique, all of them taking your breath away…I know this for a fact…I couldn’t see it anymore lol The nicest part was they let you tour all the rooms, and tour them we did! Oh my gosh this place cannot be put into words. Ice Hotel...I suppose that works.

There was a really cool ice bar there as well, within a huge dome that had a 2nd floor to it above the bar, a place our group would later turn into the nest of shenanigans. The drinks are served in glasses made of ice and they were very good! We had just 1 drink before heading out to see the rest of this place, many hidden gems lay throughout the hotel from sculptures, ice thrones, phrases etched into the middle of the ice, and hand prints galore! The chapel was a little underwhelming compared to pictures from prior years, but since we would be spending 0 time there, it served its purpose perfectly. 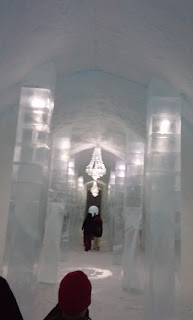 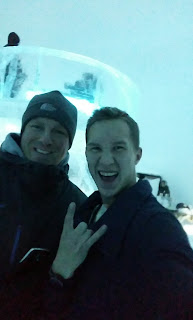 Some things to note about this hotel. You have warm rooms. You have cold rooms. We stayed in each one just one night, that’s all you need. There isn’t much to the surrounding area in terms of a night life. 2 restaurants, one on site, the other 900km down the road make up your food options (sort of). You absolutely need to plan activities with the front desk, or you may go stir crazy throughout the day. Our first night we planned a traditional Swedish spa experience, dinner at the on-site restaurant, and then time for us to get some rest.  Lets get on to that spa, it sounds so nice doesn’t it….but lets assess what the first word of this really means…traditional. Now to me, a traditional Swedish massage is hot stone, relaxing, and fairly low key. For the Sumi, the native inhabitants to this part of Sweden, relax in a more interesting way and I soon found myself wondering why in the hell we signed up. Firstly, we are given our own cabin and “guide”, Staffan, the coolest dude in Sweden. He explained the ritual like this “We will have drink of wine, we are to bathe in shower with euh tar soap and some body scrub. Then you are to go into the sauna, with much merry making and sing to the deity. Splash water on the center rock and sing oeyeyyyye ohahhyyyyyeeee ahhhuhaaaahhhhh, let your body sweat. 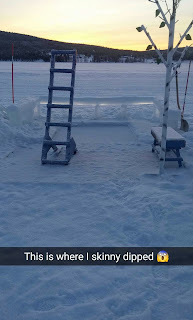 Then we will be going out into the snow for a roll around, where you come back here and flog yourself with birch leaves (not kidding), and then warm up in the sauna” ….all of this sounds pretty crazy to me, but the best part came next “avter you are warm we go to the lake and you will get in, then we will take you to hot tub”. Me: Oh. *getting in a very frozen lake in the Arctic Circle* and then he noted that clothing was optional….an option I took immediately and was buck ass naked before he could even finish the sentence. This made the rest of our group proceed in the same fashion, and we carried out the traditional Swedish spa exactly as he described (side note: some parts of the snow are solid ice, so jumping into them naked can cause bruising). What a night that was!! So much fun, not nearly as bad as we thought it would be….maybe that was the 6 bottles of wine we had in the sauna. Maybe. Dinner was very good, they served us reindeer and elk.

I would absolutely eat that again, every day, a very tasty deer like meat. We were exhausted at this point and headed off to our respective rooms…I was very happy to be in the warm room that night J The next day got even crazier. Chris and I went exploring after breakfast (sorry to Sweden for eating all of your bacon) and we had a blast! We walked all across the lake, found the little historic Sumi hut/village down the way from our hotel, and then stumbled into a tour of a very very old church. Unfortunately for us, this tour was for the deaf…we didn’t know this as we snuck in with them, we just assumed they were all quiet and we were being sneaky about it….until the signing began. We exited quite quickly and went to check out the Sumi hut. 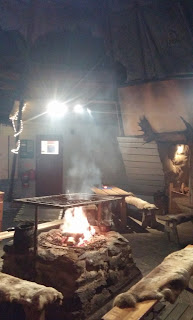 This hut was really cool, its actually a gigantic teepee with a fire in the middle, I wouldn’t have minded staying in one if it was an option. We then found our way down to the towns only grocery, and Sweden needs to work on its chill when it comes to labels, but who am I to judge those who buy “Pussi” cat food and generic hello kitty cards. Lol. The day only got better from there, as our second set of activities, the northern lights tour, was to begin soon so we had some Irish coffees before the fun! Oddly and luckily enough we had Staffan again, but were joined by 5 others, all of them pretty cool people. We jumped on snowmobiles, Chris making the mistake of letting me drive, and headed off to a very small cabin about 40 min from the hotel, where we had a really good dinner while we waited for it to be dark enough for the lights. The cabin was small, the center of which had the stove and we all sat around the outside edge with Staffan in the middle cooking. I shit you not, this place was like the UN. We had the US (my group), Australia across from us, Russians along the back, and one other couple who refused to speak to anybody… oh well. The comradery was amazing, we all have great stories to share about our travels and where to next, poking fun at each other countries (mostly on the US) and hearing about eachothers customs. It was a cool sense of unity considering it takes a particular type of person to come to this place. 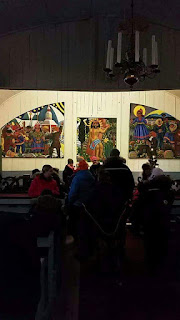 After dinner is when the real fun began. Our snowmobile set up had us in a row of 7 with Staffan leading. Bryan had his own, then me and Chris, and Brian and Jason headed out the very back…we all knew the benefit of being in the back…and we took full advantage. We were told not to speed. Nope. No racing. Not us. No roughhousing. Were too nice for that. No drinking before driving. We would never! And don’t go off the trail, the snow is deep, you could roll. Ha! Roll? These guys? Never! We were saints…the boondock kind. We drag raced each other, we jumped little hills, we exceeded 50-60 mph, and on several hard launches for our drag races, Brian and Jason managed to pop a wheelie!! Thank goodness we didn’t go off the path and roll….oh. wait. This is why we can’t have nice things. And luckily it wasn’t me who…ok. I did it. What a friggin blast that was! We tipped the thing back over and carried on, no one even knew we had fallen behind, and if they did, mums the word *looking at you Staffan*.  It only got better from there. We carried on our tipsy evening of northern lights exploring into a shcwasted evening at the ice bar. We took perch in our “nest” above the bar and conversed with many more  people from around the world. The highlight of this bar was Jacksons curious transformation from man to dog, as he made circles around us on all fours before going butt first down the ice stairs. That look fun to me, but somehow my slide was more of a cartwheel, and I tumbled the way down..oye. Going outside we found some abandoned sleds…obviously there for us and used them to race about. This had been the perfect end to a spectacular hotel. I stayed in the cold room this night, it was very warm at -5, much warmer than the -25 outside, so I was very cozy!! We got up the next morning, shuttled back to the Kiruna airport and headed to another bucket list destination for me…Amsterdam