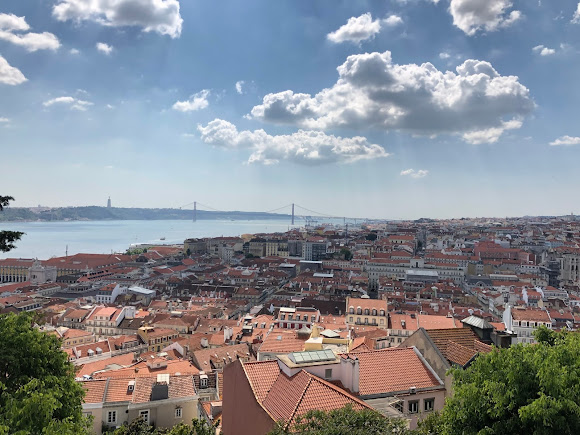 An album cover with a burning Rolls Royce on it was enough to convince me to see Portugal. I was due to set sail for a 16 day Mediterranean cruise, and did not want to sleep for the first week, so a trip before the trip was needed to adjust to the time. I can literally make a one time zone shift and have my body react as though I was on my first day withdrawing from 14 years of heroine abuse, so to think about what crossing 7 would do was terrifying. I literally vomited all over Dubai and London once because my body did not handle the "I'm gonna land and explore" mentality. 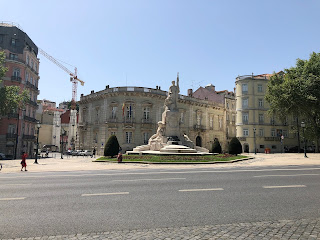 That said, Lisbon is the perfect city for the time I needed, and it’s just fuckin awesome. First of all, it is rated one of the safest cities in the entire world, and second, its not smelly, dirty, or congested. The city is charming and is filled with people who are the epitome of friendly and fun loving...perhaps they just wanted sex...
I become an extremely grumpy cunt when met with exhaustion (jet lag) and not once did I feel the need to take that out on anyone, it was completely smooth sailing. Also, Portuguese men... I'll never eat a Portuguese sausage again the same, thanks! 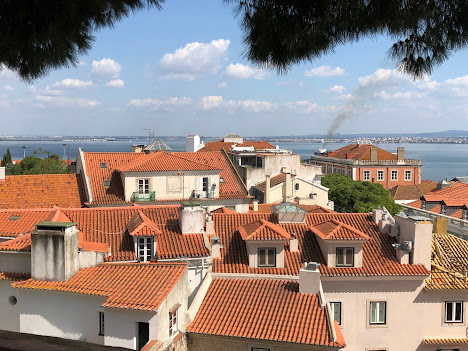 Hotels aren't usually noteworthy to me no matter how fancy or prestigious, yada yada, but for this leg of my journey I have to recommended  H10 - a chain I was recommended by my contact in Barcelona.  The hotel is set in a prime location near Marqués de Pomba in an 18th century building that was remodeled with tasteful tile work, phenomenal foods, and a fantastic overlook of the city - I would stay at this place every single time.  (much needed since I planned to fall into a sleep like death here...).
IT IS AS GOOD AS IT LOOKS 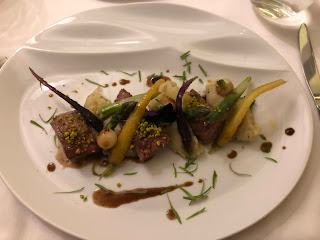 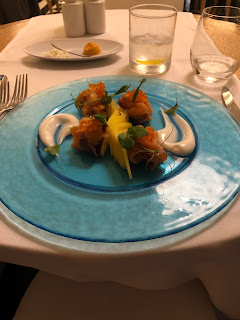 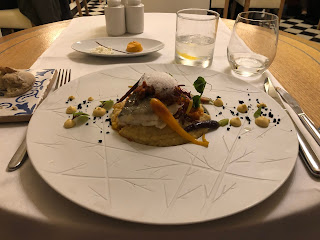 My 8:30am arrival after 16 hours of traveling meant the first place I went was the bed. A 45 min nap passed before I was up to see the city to stay awake as long as I possibly could.  My location was prime and centric to main tourist attractions, I made the most of the extreme walkability of the city - you wouldn’t need a cab to get about, just some ambition and comfy shoes.
Stop number one was a 2 mile walk for brunch in Praça do Comércio, an open area where the city meets the waterfront surrounded by stately buildings and prime shopping. Cantina restaurant served up my first dose of Portuguese food, and I will likely crave tastes like this for the remainder of my life. Seriously, the food is next level delicious and I’m drooling just writing about it. I must have been at lunch for 3/4 hours because the afternoon was quickly approaching evening and my eyes began to sink like the titanic...one of the lids hung half down while the other shuddered up and down yo-yo style. No matter, the walk home was a beautiful mix of parks and buildings.  I landed in bed by 3:30 and woke up sometime around 7am the next morning. 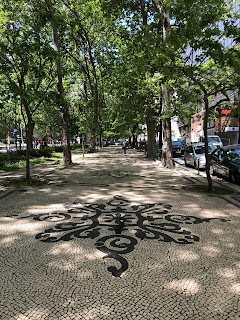 Have you ever slept so hard that you wake up having lost the memory of the days before? If not, allow me to elaborate on how it feels to wake up in a bed in a foreign country with nearly no recollection of getting there. Let’s set the scene:
*gentle oboe playing from my phone alarm*
*sunlight playfully peeking through the curtains*
*crisp cool air conditioning flowing over my face*
*absolute serenity*
Me (waking up screaming): PORTUGAL!!!!!
[I literally woke up yelling that word as though I was on a flight to Paris and suddenly remembered it was the name of my child left home alone]. 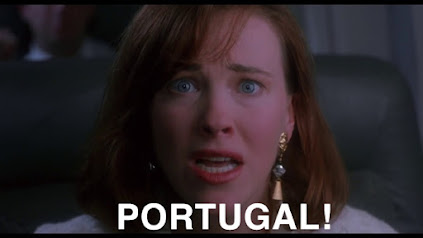 Dazed, confused, half aware of my surrounds - I was finally back to normal.

Out the door I go for breakfast and off to see Castelo de S. Jorge- an 11th century Moorish castle that I was moorish than likely to love.  If you follow my blog enough, you know I enjoy setting my adventures around recreating my favorite obscure lyrics ( Bangkok, Africa, London saying hello to my ex from the other side after calling a thousand times). Well, this is no different and I Halsey’d myself straight to the castle - they didn’t make me their queen. I tried. 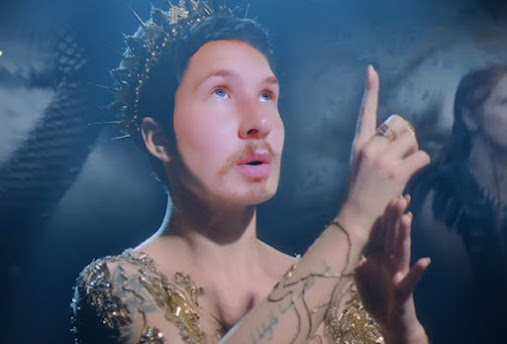 The castle was freakin awesome. I have a specific image in my head of what a castle should look like, and this was it. Only 10€ and you’re able to live your best life running all over up and down the stairs in and out of all the little towers and courtyards. 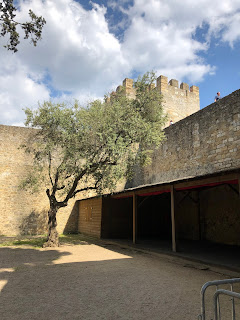 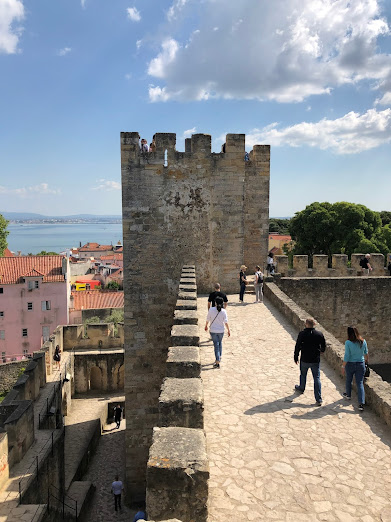 ......
I adored every second of this nonsense to Halsey on repeat and thanks to a flock(?) of peacocks that live within the walls, I snuck in a Katy Perry favorite of mine.
...it got me wondering a bunch of crows is a murder, you can have a siege of cranes, a group of hawks is a cast, hell even a lot of magpies is called a tiding....but nothing for peacocks....and what's with the name anyway? Did they consider Pissweiners? Urinedicks? Goldenshowerwangs? Tinkleweewees?  Wizzpeepees first or?   either way. I think we can do better for natures little drag queens. 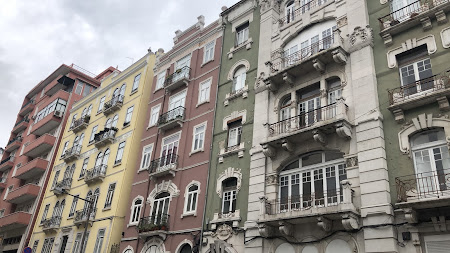 Moving forward, I spent the day enjoying hilltop views and living my best 11th century life, by which point jet lag set in. Time to walk 2.5 miles back to my hotel for some much needed but sporadic sleep. Arrived at 5:00 PM, falls asleep, wide awake at 9:30 PM. Eats. Dead ass tired at 11:30 PM. Sleeps. Wakes up at 7:00AM. ....this time, no screaming LOL 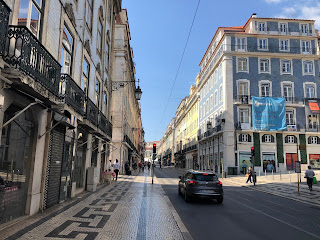 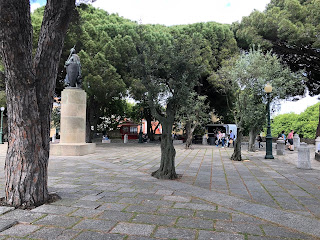 My third day was the hardest with jet lag. I had breakfast and a workout, fell asleep for 5 hours. Had lunch. Fell asleep four hours.  Dinner. Sleep. Shower. Sleep. Omg it’s now 9:30 AM the next day. Today is my last chance for a proper gay bar night out in Lisboa  and my desire has grown immensely.  Bars in Europe have some pretty insane closing times when compared to America, the last time I was able to party until 7 am was in the underground clubs of Paris a whole 3 years ago. I was overdue. 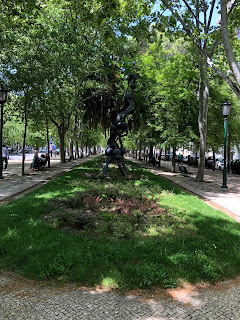 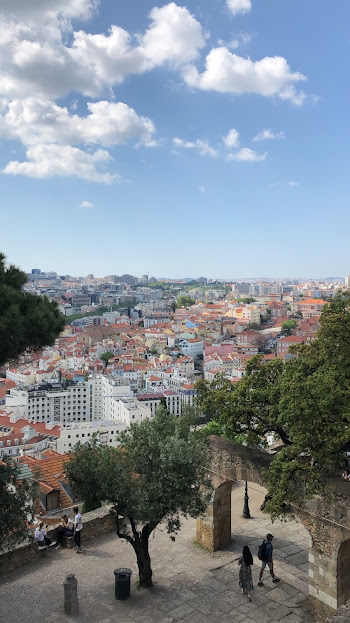 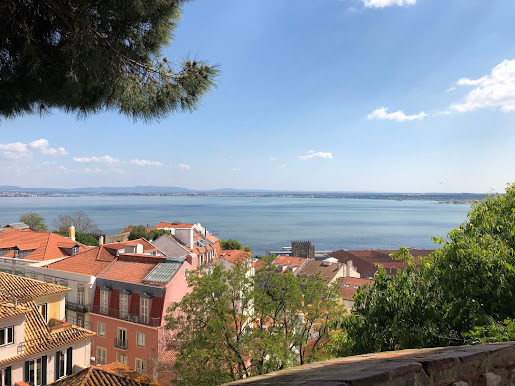 I was't sure what to get up to in the gay scene. I polled 30 men on grinder and 8 on scruff to determine which bars would be the most poppin for a late Monday night adventure. My votes came down to starting at Friends Bairro Alto and ending at Finalmente - a tiny drag bar.  Needless to say I was no disappointed in the least!!!!!  I met some great lesbians and an amazing gentleman from Brazil, who would end up being my companion for the night. It took me many many many drinks to get to the level of inebriation I am accustomed to in the US, due to the difference in what “two shots of vodka” mean. I digress, I had some kick ass people to chill with and this night was gonna be awesome.

We hung out from around midnight to 2:00 AM at Friends Bairro Alto and began making our way to the drag bar Finalmente. The trek to the bar was as entertaining as the bar itself. In Lisbon, you can walk around with alcohol, so ordering a drink at 2 and carrying it out was both unusual and fascinating. Brazilian man (Rodrigo) and I met this crazy amazing Portuguese girl and her friend, we all took our booze, and off we went. In the streets she was yelling in Portuguese all kinds of things at her best friend that I couldn’t understand, I would later find out she was calling him “piece of shit drug addict” which sounded more elegant before I knew what she said. (i love her).

Her friend jumped on a strangers back, who then carried him to the bar as we three laughed and boozed our way behind them.  Finalmente is a drag bar, which of course is my favorite -  this night ended up with the same result as when I did Latin drag night at Toucans in the US - I couldn’t understand any words but had a great time dancing. 5 am came around and my hunger had set in...out the bar I go.

As I begin my walk to fast-food nirvana, the clouds open up and it begins to rain like a motherfucker.  Walking turns into a run, run turns into a sprint, and after 300 solid feet of that, I am on instagram sending wet videos of me to Hawaii and my sister as I entertain myself about the situation.


I realize I am passing by my hotel, with another mile and a half to go, and that feeling of is it worth it sinks in...fuck yeah it is ya drunk bitch go get your food.  45 mins later, success in the bush.  I’m full, I’m at my hotel, in bed and I have 5 hours of sleep before my car is set to arrive to take me to the cruise ship!  Lisbon, it was realness.