Whether you say it Barsell-owna or Barthelo-nah, this city is fucking perfection. It LITERALLY speaks to me....and man does it talk DIRTY!

My ship had stopped in Barcelona on the way up the coast to Italy, giving me one day/night to scope out sights...however, after the cruise I flew back to Spain to Barcelona for about a week to catch Formula1 and really take in the city. 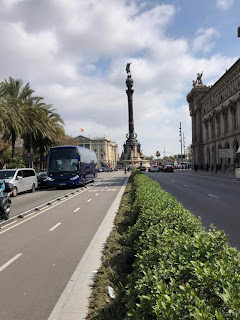 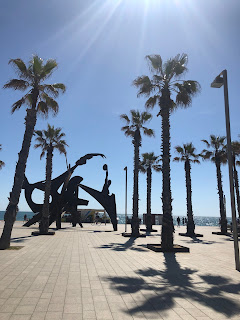 Coming off the boat,  I had only one "see it before you die" site in mind... La Sagrada Familia (in case some horrible accident occurred on the boat and I wouldn't return). Back in high school I would sit in Spanish class and trace the outline of this beast instead of listening to my teacher..Low k saya..I was super ready to see it in person. Along the way I kept notes on places to see for my return...my list was huge by the end of the day...thanks to tips from the gay community.[Scruff is the best app for travel]

Anyway,  I'm huffin n puffin through crowds of people and random alleys till finally, the structure comes into view.... it's surreal and shapes change by where your're standing...there were hours to be spent just looking at all the crazy dimensions, shapes, and details. This. Was. A. Moment.


For some reason, I was NOT prepared for the sheer number of people around this place. Barcelona is really swamped with tourists, but you'd think this was some kind of international treasure or something....needless to say, I didn't do a tour of the inside because of the overwhelming crowd...I have anxiety -__-  . Surely, Barthelohnah has other things to seeeeee

Me: What else?
Barcelona: Hold. My. Cervesa. 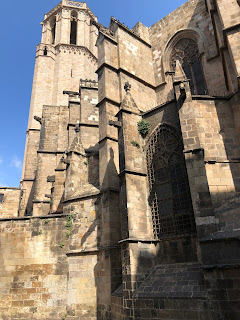 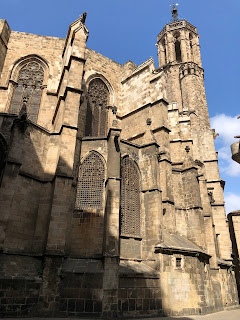 
The Gothic quarter was amazing....and then there is this gem below....
The architect was said to be this guy .......or this guy.....history continues to dispute.

With life's great mysteries on my mind,  I kept my stroll going, wandering aimlessly. 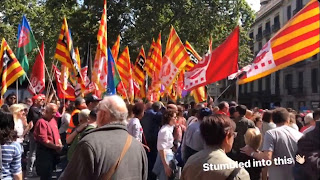 ....this was a weird parade though....as I walked down the streets with it I realized pretty slowly that some of the faces weren't happy and they didn't have any cotton candy.  Worse yet, I have absolutely no idea what they are saying....great job Spanish teacher...I sent my IG story to my buddy.... 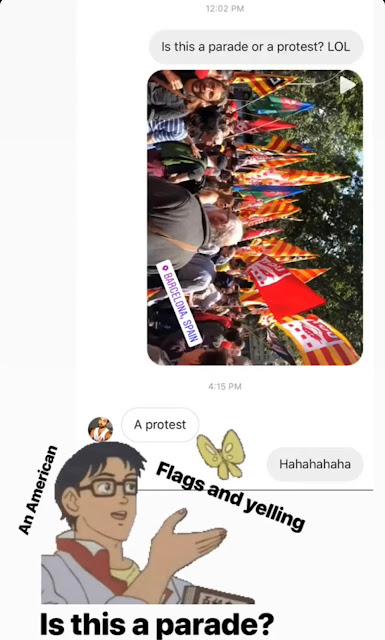 Well, whatever that was about...I had a great time with myself. All this excitement wore me out. Time to head back to the boat....can. not. wait. for. my. return...

I was v happy to not need sea legs anymore.. 15 days of water had me craving dry land. I got settled into my hotel in Port Vell, signed up for a gym, then went back out for some exploration.  These places were my top 3 for food or drink:

These pictures don't do this justice. The whole exterior of the roof is a crazy colorful work of art. 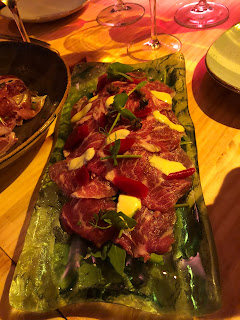 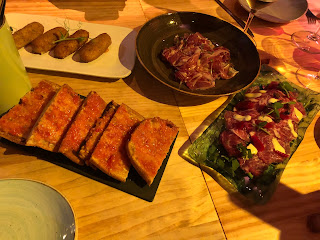 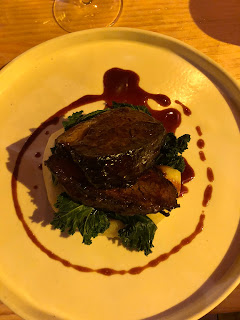 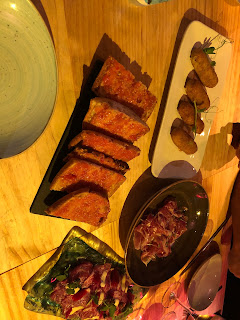 I'll dream about the food until I return....we simply do not get food like this in the states. *cries*

Look at this grocery store!

What I really came here for had finally arrived; Formula-Ooon.  NASCAR has never done it for me with all the driving in a circle nonsense. WOOOOOOOOO!. (no).  Formula Ooon is a more dramatic way to achieve the same result...its the extra as fuck version of NASCAR

Emirates flew a jet over the starting line to begin the race countdown (extra).

The seats were a nice surprise from the handsome gentlemen who checked me into the hotel. They blew me away! 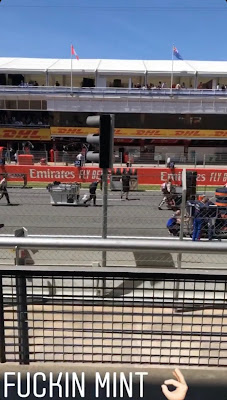 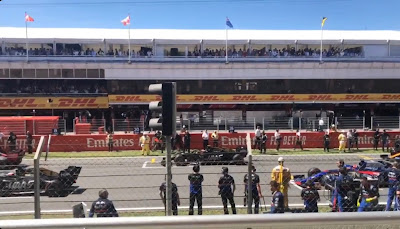 No surprise, Mercedes won. They have dominated all season...ZZzzz. Off to have some fun for the night, I was done with all this racing and needed to scope out the gay clubs.

In the video for Hold Up by Beyonce, she vents her denial in a beautiful poem...one that inspired the parody poem I made for my time in Barcelona; albeit with a more sexual tone. (seriously check out the video).
Link: Hold Up - Beyonce ...better yet. Titus Lemonading:


Me: *dives into pool*  I tried to change......opened my legs more, tried to be sluttier, fitter...more...woke.   fleshlight for 60 days, wore tights, abstain from poppers, abstain from PrEP..slowly did not dish all the T..In that time my bush I grew beyond my foreskin...I slept with Matt; like a whore...I swallowed his sword...I Lemonaded.  Into the darkroom. I confused my mens, bukakked a river. Got on my knees and sucked 8 men and said, "i need"..... ...I bathed in grease, and plugged my bussy with the phallus of the holey wall, but still inside me begged the need to hoe....are you breeding? ....Are you breeding me?.... 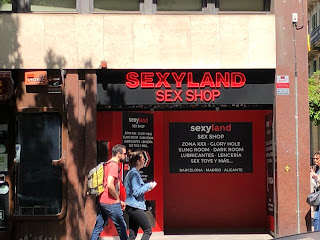 
I digress, Barcelona's gay scene is bringing out this dormant side of me. I hadn't seen this character in me since Cancun. At the very least, I would gain insight into one of the oft mentioned terms that popped up on the apps....a darkroom? Darkrooms were places you can sleep calmly, duh. Ha, I was way off. Now, using birds and bees; I can explain to those who are unfamiliar what they really are.

Well, step inside and you will “see” that some birds like watching bees with other birds and some bees like HJ's from stranger birds. Sometimes birds like to become slave holes to swarms of bees and sometimes a bee just wants to ruffle a bunch of feathers. Mostly, its where birds and bees do things you would do if you knew nobody could really see.

Barcelona sure does have a lot of those rooms in a lot of the gay clubs. good thing I walk everywhere with good christian values and Jesus at my back. Nothing but I'M thoughts LYING and prayers. 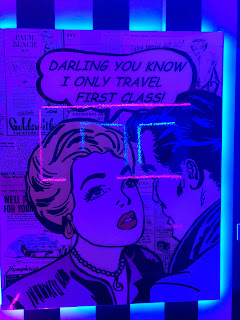 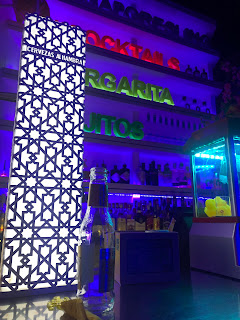 I really liked the gay bars here. Many styles, every niche had their bar, drinks were fantastic, and all the people were super nice to me! The rest of my trip played out like any other...Wake up, gym, brunch, booze, bars, dinner, bars, sleep.(x3) Tons of really cool pics along the way! 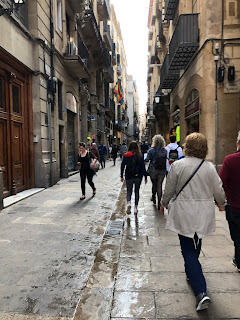 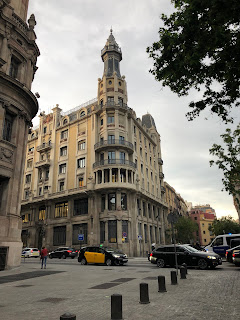 One night this was being closed up and I got a peak inside. This is the Basilica of Santa Maria del Mar 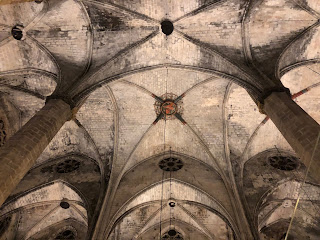 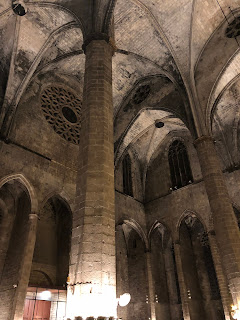 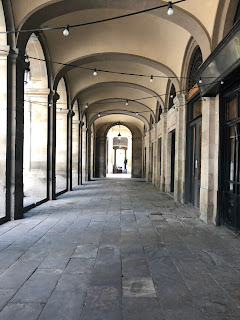 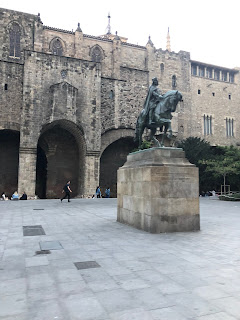 Barcelona...I love you. Until we meet again.

*I took a trip to Sitges...that story is to come*
Posted by TryonTheWorld